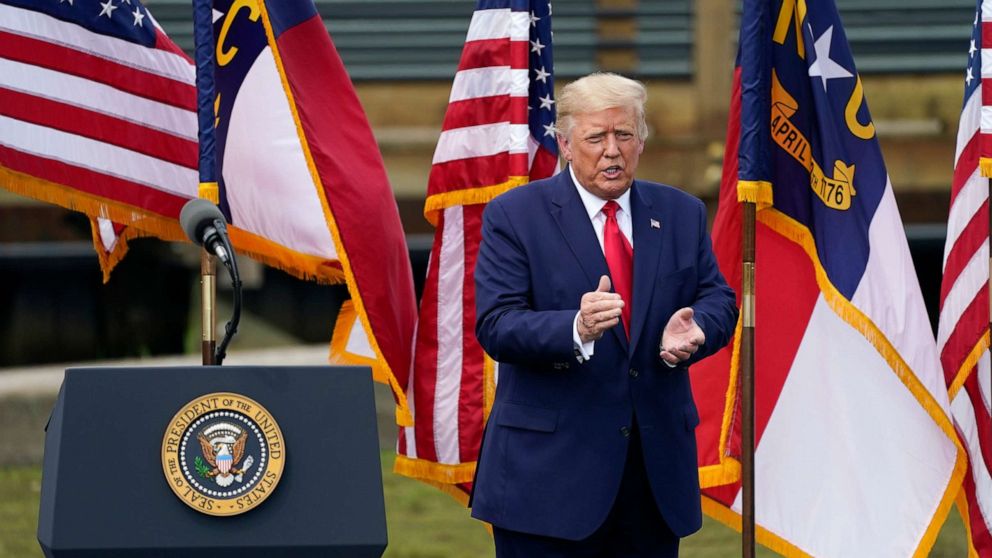 State election officials in North Carolina on Thursday rejected President Donald Trump’s call for supporters to vote to both vote by mail and in person to “test the system.”

“The State Board office strongly discourages people from showing up at the polls on Election Day to check whether their absentee ballot was counted. That is not necessary, and it would lead to longer lines and the possibility of spreading COVID-19, Karen Brinson Bell, executive director of the North Carolina State Board of Elections, said in a statement.

Trump has long sought to undermine public confidence in the upcoming election with baseless warnings that mail-in-voting could lead to widespread voter fraud.

In the battleground state of North Carolina Wednesday, he encouraged people to vote by mail and then also go to the polls on Election Day, amid the ongoing coronavirus pandemic, in order to personally verify that their vote has been counted.

“They will vote and then they are going to have to check their vote by going to the poll and voting that way because if it tabulates then they won’t be able to do that. So, let them send it in, and let them go vote,” Trump said Wednesday in an interview with a North Carolina news station WECT.

He continued: “And if the system is as good as they say it is, then they obviously won’t be able to vote. If it isn’t tabulated, they will be able to vote. So that’s the way it is, and that’s what they should do.”

It is illegal to vote twice. And while election laws vary by state, it would amount to a Class I felony offense in North Carolina.

The president qualified his comments in a series of tweets Thursday morning, saying he is urging people to verify that their mailed ballots are counted by Election Day, and if not, to vote in person at the polls.

“MAKE SURE YOUR VOTE COUNTS & IS COUNTED, SIGN & MAIL IN your Ballot as EARLY as possible” and then to follow up being going in person “to your Polling Place to see whether or not your Mail In Vote has been Tabulated (Counted). If it has you will not be able to Vote & the Mail In System worked properly. If it has not been Counted, VOTE (which is a citizen’s right to do).”

Responding to the potential that a mailed-in ballot may not be counted by Election Day, the president minimized the potential for a person to inadvertently commit fraud by casting two votes in the same election, contending that the second ballot “will not be used or counted.”

“If your Mail In Ballot arrives after you Vote, which it should not, that Ballot will not be used or counted in that your vote has already been cast & tabulated,” Trump said

Within hours, Twitter appended notices to two of these tweets, saying that they violated its policy by “encouraging people to potentially vote twice.”

Before the president’s tweets Thursday morning, White House press secretary Kayleigh McEnany emphatically denied that the president was suggesting people should try to have their vote casted twice.

“The president is not suggesting anyone do anything unlawful,” McEnany said on Fox News. “What he said very clearly there is make sure your vote is tabulated. If it is not, then vote. When you get an absentee ballot and send it in there are poll books and it records that you have voted and if you show up at a polling site they look at the poll book and say your vote has been counted.”

President Donald Trump leaves the stage after a speech, Sept. 2, 2020, in Wilmington, N.C.

President Donald Trump leaves the stage after a speech, Sept. 2, 2020, in Wilmington, N.C.

Attorney General Bill Barr, asked to explain the president’s comments in an interview on CNN Wednesday, said he wasn’t sure exactly what the president meant but didn’t dismiss the idea outright.

“I don’t know exactly what he was saying, but it seems to me what he’s saying is, he’s trying to make the point that the ability to monitor this system is not good,” Barr said. “And if it was so good, if you tried to vote a second time you would be caught if you voted in person.”

Attorney General William Barr listens during an event to highlight the Department of Justice grants to combat human trafficking, in the Indian Treaty Room of the Eisenhower Executive Office Building, Aug. 4, 2020, in Washington, D.C.

Attorney General William Barr listens during an event to highlight the Department of Justice grants to combat human trafficking, in the Indian Treaty Room of the Eisenhower Executive Office Building, Aug. 4, 2020, in Washington, D.C.

The president’s comments come as poll after poll show him trailing to his Democratic opponent Joe Biden and under scrutiny for his handling of the coronavirus pandemic, which has resulted in more than 6 million infections in the U.S. and nearly 185,000 deaths.

The president’s comments were the latest evolution in a months-long rhetorical campaign by the president to undercut public trust in the upcoming election. He has relentlessly repeated unsubstantiated claims that the expected increase in mail-in-voting due to the coronavirus could result in 2020 being the “most rigged election in history.”

Anticipating his predictions of fraud, Trump has declined to commit to accepting the results of the election if things don’t go his way.

Experts and election officials across the country have pushed back against the president’s assertion that mail-in voting could discredit an election.

“Voting by mail is not some kind of new, untested innovation,” Dale Ho, director of the ACLU’s Voting Rights Project told ABC News. “We’ve been using it in this country since the Civil War. And I think over 80 percent of Americans live in states that have committed to letting every eligible voter cast a ballot by mail in November. So it’s not something kind of new or crazy. It’s been something that people in this country have been doing for over a century.”

ABC News reached out to elections authorities in all 50 states for their assessment of Trump’s claims. Of the nearly 30 secretaries of state and elections board offices who provided on-the-record responses in July, none expressed doubts in their state’s ability to protect the integrity of their elections this November.