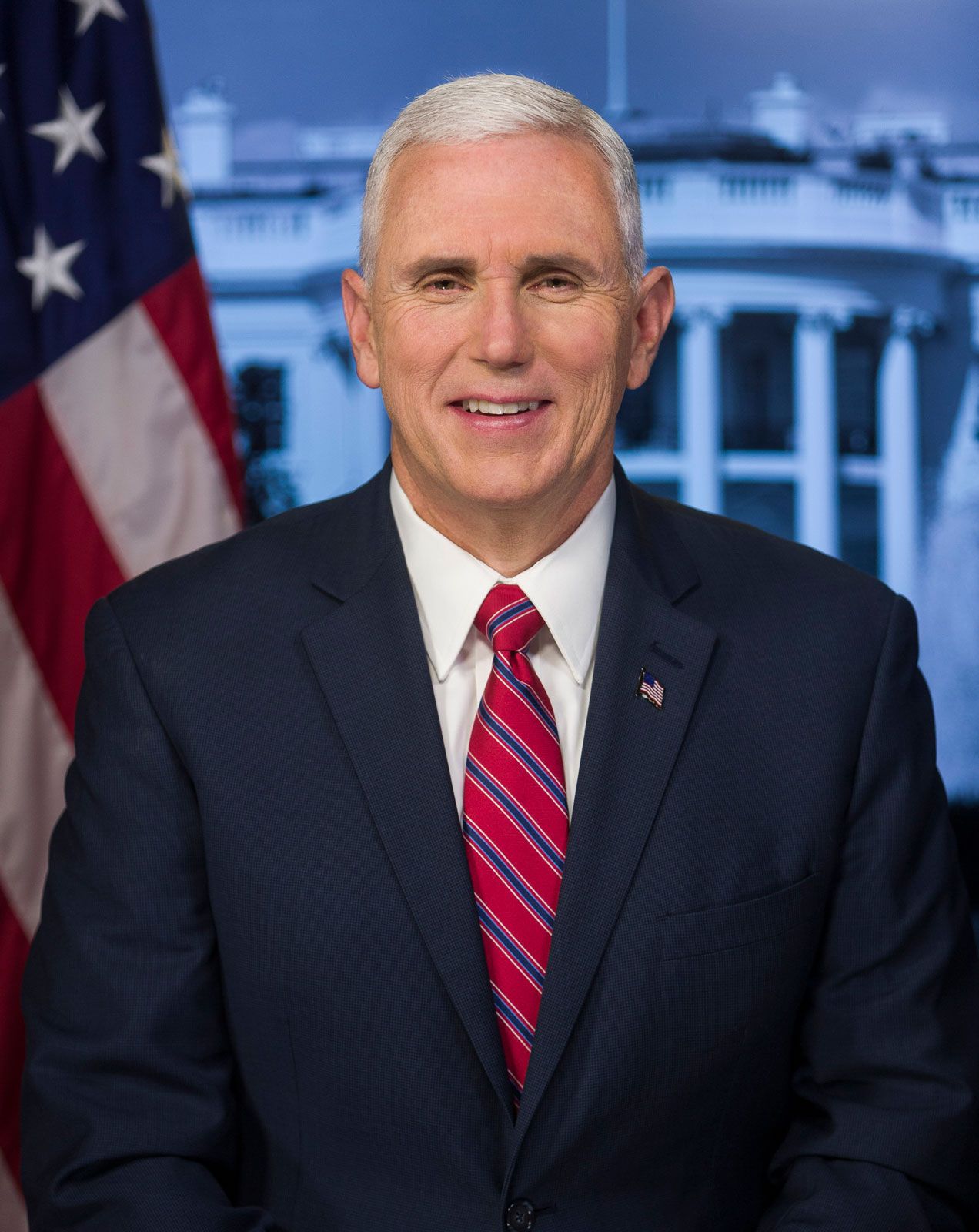 Pence was raised in an Irish Catholic family; his parents owned several gas stations. While studying history at Hanover College (B.A., 1981), he became a “born-again, evangelical Catholic.” After earning a law degree at Indiana University in 1986, he entered private practice. Two years later he unsuccessfully ran for the U.S. House of Representatives, campaigning as a populist and social conservative. In 1990 Pence staged another failed bid, which drew criticism for its negative ads. He later wrote “Confessions of a Negative Campaigner” (1991), an essay in which he apologized for his strategy in that campaign, believing it un-Christian. He later hosted an Indiana radio talk show (1992–99), which he described as “Rush Limbaugh on decaf,” and a Sunday morning local TV program (1995–99).

Through his media experience, Pence became an effective orator and developed his conservative brand. In 2000 he again ran for the House of Representatives and this time was successful, taking office the following year. During his six terms in Congress, he became especially known for his social conservatism; he often stated that he was “a Christian, a conservative, and a Republican, in that order.” He opposed same-sex marriage and the repeal of “Don’t Ask, Don’t Tell,” a U.S. policy under which gay and lesbian service members had to conceal their sexuality or risk expulsion from the military. Strongly opposed to abortion, Pence pushed to defund Planned Parenthood. He also garnered notice for breaking with his party on a number of economic issues, notably opposing the 2008 bailout of financial institutions during the subprime mortgage crisis. In addition, in 2003 he voted against the Medicare drug expansion, which he argued was an unfunded entitlement. His willingness to challenge the party establishment made him popular within the Tea Party movement.

In 2012 Pence ran for governor of Indiana. His campaign focused on economic issues, notably job creation and tax cuts. After narrowly winning the election, he took office in 2013. Two years later he received national attention when he signed the Religious Freedom Restoration Act (RFRA), a state law that purported to protect individuals’ ability to exercise their religious beliefs. Opponents, however, claimed that the bill allowed discrimination, giving businesses permission to refuse to serve gays and lesbians. Amid a widespread backlash—which included companies and sports leagues threatening boycotts—Pence signed a revision that prevented service from being denied on the basis of “sexual orientation, race, religion, or disability.” He also made headlines in 2016 when he signed a law that barred abortions when the fetus had a disability.

On July 15, 2016, Trump, the presumptive Republican presidential nominee, named Pence as his running mate. It was thought that he would help Trump with conservative voters as well as provide political experience, which the presidential candidate lacked. In addition, he was a popular choice with the party’s establishment, which had become worried about Trump’s often controversial remarks as well as his failure to repudiate racist elements among his supporters. At the Republican National Convention the following week, both candidates received the party’s official nomination. A month before the election, the ticket faced a major scandal after a hot-mic video from 2005 surfaced in which Trump told an entertainment reporter in vulgar language that he had tried to seduce a married woman and bragged about grabbing women by the genitals. Pence stated that he was offended by the comments—later reports, denied by Pence, claimed that he tried to replace Trump as the presidential pick—but he remained Trump’s running mate. On November 8, 2016, the Trump-Pence ticket defeated Hillary Clinton and her running mate, Tim Kaine. Pence resigned as governor of Indiana shortly before being sworn in as vice president on January 20, 2017.

Once in office, Pence sought to advance Trump’s policies and staunchly defended him through a number of scandals. In 2019 he notably opposed the House’s impeachment proceedings against Trump, who allegedly had withheld aid to Ukraine in order to pressure the country into opening a corruption investigation into Joe Biden; in 2020 Biden became the Democratic presidential nominee. While Trump was impeached by the House, he was acquitted in the Senate trial in February 2020. That month Pence became head of the government’s task force handling the coronavirus outbreak, which, in March, was designated a global pandemic. As the cases spread in the United States, businesses and schools began to close, and the economy entered a downturn that rivaled the Great Depression.The government’s handling of the crisis drew sharp criticism as some people alleged a lack of leadership and claimed that both Trump and Pence made misleading or false statements that minimized the seriousness of the coronavirus.