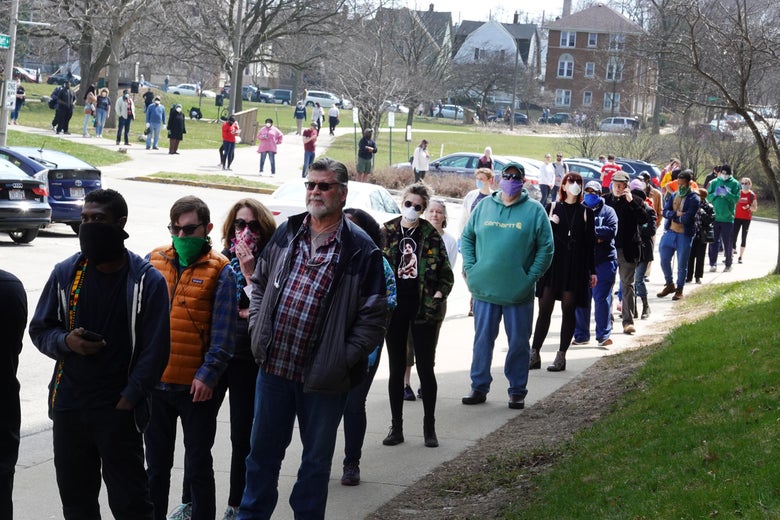 President Donald Trump on Thursday repeated his encouragement to his supporters to vote twice, first by mail and then—if election officials allow—in person. Voting twice—as the president requests—is not only illegal, but a recipe for chaos in November. Perhaps that is exactly the point. Trump defended his call as a way to test the system against voter fraud, but it’s like encouraging his supporters to try to rob the 7-Eleven to make sure that the police can respond adequately to robberies.

Speaking briefly to WECT television in Wilmington, North Carolina, on Wednesday, Trump said the following when he was asked if he was confident in North Carolina’s system of allowing people to vote absentee:

They’ll go out and they’ll vote and then they’re going to have to go and check their vote by going to the poll and voting that way because if it tabulates then they won’t be able to do that. So let them send it in, and let them go vote. And if their system’s as good as they say it is, then obviously they won’t be able to vote. If it isn’t tabulated, they’ll be able to vote. So that’s the way it is, and that’s what they should do. …

But send in your ballots, send them in strong, whether it’s solicited or unsolicited. The absentees are fine. We have to work to get them. It means something. And you send them in but go to vote and if they haven’t counted it, you can vote. So, that’s the way I view it.

The president tried to clean up the statement in a series of Thursday morning tweets, suggesting that his supporters who vote by mail should also go to the polling place and only vote if election officials report that their mail-in ballots have not been received.

To begin with, it is illegal to attempt to vote twice in an election. This is true under North Carolina and federal law. And it doesn’t matter if one is doing it to “test” the system. In Texas in 2016, as reported by the Washington Post:

Phillip Cook was arrested on Election Day after voting twice. He claimed to be an employee of Trump’s campaign who was testing the security of the electoral system. He wasn’t an employee of the campaign—and the polling location’s security worked perfectly well, it seems.

Trump might have even broken North Carolina law by encouraging the conduct. It is illegal in the state

So are Trump’s comments themselves a criminal inducement to his supporters to illegally vote? Or, in the language of the statute, was Trump by his comments “induc[ing]” with “intent to commit a fraud” a person to vote “more than one time” in “the same …. election”? I think a case could be made that he was. He was encouraging people to vote both by mail and in person. The questionable part is about his intent. It sounds like he was suggesting an attempt at double voting as a means of testing the integrity of the system, or assuring that his voters can cast at least one ballot for him. Is that a fraudulent intent? I could see how a jury could find it to be so especially given Trump’s other statements suggesting he believes that such double voting would not be caught by election officials. Trump could also argue that his statements, which offered nothing of value but only encouragement, were not an “inducement” to vote.

Another possible defense is that Trump was “joking” or not being serious about his comments and this was typical Trumpian hyperbole. Perhaps so, and I do not expect Trump to be prosecuted, but I think many people may hear his comments and think he is serious. This is particularly true given that he repeated the comments the very next day and his attorney general, William Barr, refused to acknowledge that double voting is illegal.

And this is the much more important point than whether Trump violated North Carolina law with his statement to WECT. Supporters of his, in North Carolina and elsewhere, could follow his advice and try to vote twice. Those people face potential prosecution for a felony, as the North Carolina State Board of Elections made clear in a Thursday statement, and it is awful for the president to be encouraging illegal conduct.

What’s worse, the comments are going to put a strain on an election system stretched to its limits by trying to conduct a presidential election in the midst of a pandemic and with one of the candidates constantly casting doubt on the election’s legitimacy. Again, this is probably Trump’s real intent. North Carolina, like other states, has systems in place to prevent double voting, such as electronic poll books that let poll workers know if someone showing up to vote has already cast an absentee ballot that has been returned. (It is these checks that slow down the processing of absentee ballots and explain why we might not have results on election night in a close election.)

But these systems are designed under the sensible premise that few people are going to risk felonies and vote twice. It’s the same design for police departments, which would look very different if people were trying to rob every 7-Eleven every day.

Lines are already going to be long in some places on Election Day. The pandemic means it is harder to find poll workers and so there will be polling place consolidations and fewer workers, all contributing to a longer queue. Trump’s suggestion for his supporters to go to a polling place to try to vote twice—and via a complex procedure of trying to get a poll worker to confirm that an absentee ballot has been tabulated, which in some cases it will not have been—will add to those long lines. The lines will be even longer if the voter insists on casting a provisional ballot after having voted by mail. (That provisional ballot won’t be counted if the voter has already voted.) Those long lines will do real damage to an Election Day infrastructure that is already looking stretched to the limits—the ensuing chaos will benefit the candidate claiming that the whole process is rigged no matter what the outcome: Donald Trump.

Trump has cast doubt on the legitimacy of the election, claiming that voter fraud is widespread in the United States when it is rare. These new statements seem calculated to create more confusion and chaos at the polls—and possibly more actual fraud. It will also cause more people potentially with COVID to congregate at the polls, exactly the opposite of what we need for a safe and fair election during November.

For more of Slate’s political coverage, subscribe to the Political Gabfest on Apple Podcasts or listen below.

Readers like you make our work possible. Help us continue to provide the reporting, commentary, and criticism you won’t find anywhere else.